A New Way to Incorporate Nature into Your Life 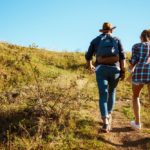